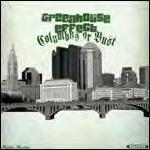 Representing Columbus, Ohio, Greenhouse Effect is producer Blueprint and MC Manifest. They’ve been chugging away deep in the underground for many years, but with Blueprint’s recent successes, (such as his collaboration with RJD2 as Soul Position) Greenhouse Effect is now positioned to make a louder noise in the crowded scene.

Columbus or Bust is a dark, dense album filled with biting lyrics and cynical observations about the underground hip-hop scene. The source of their vehemence on such issues is not clearly illustrated beyond the usual music industry wear and tear (“I feel like Ruben Studdard in a world full of Clay Aikens” bemoans Manifest) but it certainly informs almost every track on the album. Manifest’s priorities are demonstrated on “Columbus or Bust” — “Too many guys are preoccupied with Soundscan, I’m worried about my sound, man.” As compelled as he is to make music even while he hates the industry and the mechanism that allows him to produce it, it seems as though any level of reasonable success he might achieve would result in mental turmoil enough to make for an interesting follow-up to Columbus or Busts’ introspective psychoanalysis.

While definitely a glass-half-empty type of guy, Manifest’s grumblings makes for some entertaining listening. On “E Thugs” he brutally and hilariously slays the new generation of internet ‘mcs’ and backpackers who don’t venture beyond the comfortable anonymity of cyberspace.

Blueprint is the architect of a series of aggressive and dark tracks to match Manifest’s gloomy lyricism. The result is a solid album albeit one that, fifteen tracks of vitriol and cyncism later, might have you reaching for the Rolaids and thinking that Manifest might want to emerge from his basement once in a while to talk a walk in the park. Even so, its the kind of stylized hip-hop that has the potential to elicit a cult-like following, ironically from those very backpackers and internet MCs they rail against so much.